Will living together before marriage destroy your relationship?

Within the last ten years, cohabitation has become a normal, expected stage of relationship development and many marriages are now preceded by cohabitation. But is this a good thing?

Living together outside of marriage, called cohabitation, is becoming more and more common. Within the last ten years, cohabitation has become a normal, expected stage of relationship development and many marriages are now preceded by cohabitation. But is this a good thing?

Scholars have consistently found cohabitation to be a predictor for problems in marriage rather than helpful. Yet we continue this trend, and many people even encourage it. This may be because there are a number of myths about the benefits of cohabitation that still hold more influence among young people today than the research.

So what are these myths and what does the research say about them? Are there really benefits to cohabiting before marriage? Scott Stanley, Howard Markman, and Galena Rhoades of the University of Denver have committed much of their scholarship to understanding just that. What they have found may be surprising.

Myth #1: Living Together is a Good Way to Test a Marriage

If you live together, then you are able to get a better glimpse into the life with a potential partner. If you find something you don't like, it is easier to jump ship when you are not actually married. But if they pass the test, then you know your marriage will be so much stronger. In theory, this idea sounds great, but the reality doesn't match up.

In one of their recent studies, the Denver team found that couples who are living together to "test" their marriage are more likely to experience conflict, abuse, and instability than couples cohabiting for other reasons. This is even before marriage has occurred, and the trends continue into marriage.

Why it doesn't work

The problem with this myth is that we are making the claim that cohabitation is no different than marriage, but research suggests that is not true. The two are as different as renting vs. buying. Renting is often chosen because of the possibility of leaving an apartment, or other rental unit, at some point and moving elsewhere. Because of this, we do not invest in the apartment, but are happy to leave it as we found it so we can get our deposit back. When we buy, however, we have the intention of staying in one place for a long time and are more willing to make investments, such as renovating the kitchen or carpeting, making efforts to improve our home.

Cohabiting is like renting. We enter the relationship with the idea that we CAN leave if things don't work out. This thought process then inhibits investment in the relationship, which then decreases the chances of relationship success. There is less motivation to make efforts into resolving our differences and less desire to improve ourselves for our partner. We take no ownership of the relationship.

Myth #2: Cohabiting Relationships are Easier to Get Out of Than Marriage

Cohabitation is easier to break off than marriage, just because there is no legal contract and process of breaking up. We can just go our separate ways and never have to deal with each other again. Unless we are absolutely committed to each other, we shouldn't enter something as serious and binding as marriage because we need to leave our exits open.

The truth is that many cohabiting couples still end up either getting married or staying together despite relationship problems. They find that leaving is not as easy as they assumed.

Why it doesn't work

While it is true that leaving a cohabiting relationship does not require a court decision and legal fees, this does not mean there are not other barriers to leaving. Stanley and colleagues have found that couples who live together are more likely to build up what they call "constraints" or anything that makes staying in a relationship easier than leaving it. Some examples of constraints are a shared lease, pet, shared bank account, or even a child. This build up of constraints often leads couples to stay together because it is more costly to leave. Instead, they end up married having already established negative patterns of communication and commitment. Instead of having made the choice to be in the relationship, they often feel trapped instead.

Myth #3: Living Together after Engagement is Okay

In reality, research suggests this myth is partially true. Cohabitation ONLY after engagement does not appear to be predictive of major problems. Why? Because engagement gives couples a clear direction for their relationship, their commitment is not based on constraints but actual choice of partner, and they are already making investments into their relationship. In other words, engaged couples have taken ownership of their relationship and intend to make it last, just like couples who wait to live together until they are married. However, there is also research that suggests that even engaged couples who are cohabiting may experience problems if one partner is more committed to the idea of marriage than the other. Even in this situation, engagement does not guarantee couples will avoid some of the negatives associated with cohabitation and it is vital that couples have a clear and agreed upon trajectory for their relationship.

The good news is, we are beginning to understand why cohabitation before marriage contributes to relationship difficulties. This means that those who have cohabited can make whatever adjustments they need to avoid negative patterns in their relationships. 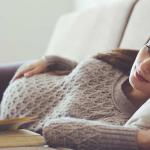 7 Ways to Feel Awesome While You're Pregnant