2 ways to make big money by doing nothing

There are two ways that doing nothing saves you big money. Do nothing in these two cases, and improve your family's financial life and your retirement.First, decide not to sell your car and buy a new one.

There are two ways that doing nothing saves you big money. Do nothing in these two cases, and improve your family's financial life and your retirement.

First, decide not to sell your car and buy a new one

Most people will do this dozens of times over their lives. We all know someone who buys a new car every year or two, perhaps even the same model in the same color. This is an expensive habit.

Imagine this hypothetical, nonsensical transaction. Let's say Bob has a one-year-old blue car (pick your favorite make and model). Let's assume that Bob would like a red one but is otherwise perfectly happy with the car. So Bob heads down to the dealer to trade his blue car for the red car (let's assume they have a used red car otherwise identical to his on the lot).

In theory, of course, the two cars are economically identical and Bob should be able to trade one for the other at no charge, right? WRONG—that won't happen. Bob will get about 20 percent less for the trade in than he pays for the car he drives away. Why? Because the dealer will offer Bob a warranty of some sort, financing, a fancy place in which to do the transaction, a free cup of coffee and perhaps a hot dog. Bob offers the dealer a used car that may or may not have problems he doesn't disclose, if only because he doesn't know they exist. For these and other reasons the car he trades in will never be valued as high as the car on the lot.

On top of that, Bob will pay registration fees, sales tax on the difference, and anything else the dealer and the state can think of to charge him while he's got his checkbook out. When he leaves, Bob has an economically identical car to the one he drove in with, but he's giving up 20 to 25 percent of the value in transaction costs to the dealer. (Bob wouldn't do much if any better selling his car in the newspaper, on Craigslist, eBay, or parked on the corner.)

Of course, Bob would never make this trade-he'd paint the car instead. But the hypothetical transaction helps to highlight a key point. The transaction of buying a car is very expensive. By reducing the number of times you buy and sell a car, you are putting money in your wallet. When you buy a car, plan to drive it for at least seven years and preferably for ten or more.

Given that buying a new car costs about $4,000 in transaction-related expenses, if you reduce the number of times you do that in your lifetime from 25 to 10, you'll save $60,000 over your lifetime - by doing nothing.

Second, when you get the itch to sell your home and buy a new one, don't

Some people move around town in a frantic hopscotch hoping to find the perfect home, the perfect neighborhood or the perfect school. Each purchase and sale costs about 10 percent of the value of the homes, easily $20,000 today. If you do that twice in your lifetime instead of ten times in your lifetime you'll easily save $160,000 - by doing nothing! 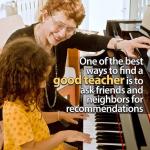 How to Choose the Right Private Teacher For…