Jennifer Aniston Reveals She Was Going Through IVF Treatment Amid Pregnancy Rumors: ‘It was a challenging road for me.’

The "Friends" star opens up about going through IVF treatment.

Jennifer Aniston recently revealed in a candid new interview with Allure that she was going through in vitro fertilization (IVF) treatment amid pregnancy rumors surrounding her previous marriages with Brad Pitt in the early 2000s and Justin Theroux in 2015. Aniston had a highly publicized five year marriage to Brad Pitt back in the early 2000s where the subject of children for the couple was a hot topic in the tabloids. She remarried actor Justin Theroux in 2015, who she separated from just two years later, but experienced the same media attention as she'd gotten during her last marriage - when was she going to have a baby? What the public didn't know was that Aniston was trying, but was having trouble. “It was a challenging road for me, the baby-making road,” Aniston said, admitting “nobody” knows about her pregnancy journey. “All the years and years and years of speculation... It was really hard. I was going through IVF, drinking Chinese teas, you name it. I was throwing everything at it. I would’ve given anything if someone had said to me, ‘Freeze your eggs. Do yourself a favor.’ You just don’t think it. So here I am today. The ship has sailed.”

The "Friends" actress admits that she has no regrets and actually feels some relief now that the period of becoming a mother is no longer in the picture. “There is no more, ‘Can I? Maybe. Maybe. Maybe.’ I don’t have to think about that anymore,” she said. She admits one of the most painful aspects of it was the "narrative that I was just selfish" or "just cared about my career" or even that her marriage ended due to her desire not to have children. “And God forbid a woman is successful and doesn’t have a child,” she said. “And the reason my husband left me, why we broke up and ended our marriage, was because I wouldn’t give him a kid. It was absolute lies. I don’t have anything to hide at this point.”

Aniston says that she is now enjoying her single life in Los Angeles with her two dogs, Clyde and Chesterfield, and admits that she feels the best she's ever felt. “I feel the best in who I am today, better than I ever did in my 20s or 30s even, or my mid-40s." She tells her future self, “You’re going to be 65 one day and think, I looked f—ing great at 53.” 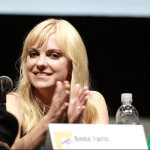 Anna Faris Gives an Update on Her Relationship…