How Parenthood Continues to Cost Women More Than Men

The Truth About the "Motherhood Penalty."

One of the worst things a working woman can do is have children. While having children is one of life's greatest gifts, women get immediately subjected to unfairness. It is a topic most people prefer to sweep under the rug as hearsay or opinion-based.

Women are superheroes for the pain they bear to enter motherhood, but the hardships and expectations they face are appalling. Here are five ways parenthood affects work and family life for women and men.

Let us start with the obvious. The gender pay gap has been a highly debated topic for years. While pay discrimination became illegal over a century ago in the United States, women continue to face the gender pay gap problem on the losing side, with mothers taking the most brutal hit. On average, women make 80 cents for every dollar a man earns, and this consequence will follow women well into retirement. This number is even lower for mothers, who make 75 cents for every dollar a man earns, which comes to 16,000 dollars less annually. Fewer earnings mean fewer social security benefits to rely on down the road.

It's often referred to as the "motherhood penalty" for women making less in the workforce. Employers still seem to believe that women are expected to stay home and be caregivers while men are the breadwinners. Women can be valuable to companies. Even with many women across the globe running Fortune 500 companies, the stigma still exists that mothers are expected to work less and become less productive.

Women are penalized for having children. Research has shown that mothers who are employed account for the majority of all gender pay gaps. A study from Sigle-Rushton and Waldfogel found that 44 percent of employed fathers with children under 18 made less than 40,000 dollars annually, and when it came to mothers, that number was nearly double at 81 percent. Mothers even earn less than their non-mother co-workers by five percent.

Mothers face discrimination from the beginning when seeking employment. They are less likely to get hired than non-mothers, even though most companies won't admit it. Researchers created a study to look at hiring preferences within companies using multiple resumes, with some resumes mentioning the applicant was a mother. Some mentioned the applicant was a non-mother. Respondents said they would hire 84 percent of the non-mothers, compared to just 47 percent of mothers. Employers automatically calculate the time-off a mother will need ranging from the pregnancy to maternity leave to childcare. Many employers don't want the burden of filling the gaps. It's easier for them, or at least in their mind, to hire a non-mother or men.

The number one question employed mothers get asked is "who is taking care of the children while you work," as if the father's existence is merely financial. Women are capable of caring for their children and working, I know, huge plot twist. Women are expected to stay home and care for their children because that was common for previous generations. In the 1960s, over 65 percent of first-time mothers stopped working a month prior to the birth of their child. Now the statistics have changed with first-time mothers working longer into their pregnancies and even coming back to work much sooner than previous decades, likely due to fear of losing their career or job. Men who responded in the American Family Survey said they relied on childcare from themselves and their spouse nearly 20 percent higher than women who responded on extended family and daycare providers. Almost 70 percent of the respondent mothers felt they carried the weight of childcare responsibilities, while the men felt childcare was evenly divided. Men have it ingrained in their brain that the woman is the caregiver and often don't realize the stress that adds to the working mother. Speak up with your spouse because they may not realize that stigma is outdated.

Mothers fear the risk of losing their job if they take too much time off, whether for the pregnancy or at the end with the maternity leave if they are lucky even to get maternity leave. Many states still have at-will employment regulations that allow a company to fire an employee for any reason. This is a considerable blow to mothers where time-off requests can be excessive, thus directly impacting the company. Even during the pregnancy, women are often put under limitations and restrictions that can, unfortunately, get them terminated. Former UPS driver Peggy Young filed a lawsuit against her employer after being placed on unpaid leave. A doctor told Young to avoid heavy lifting, which is very common. Her employer refused to give her lighter loads and ultimately put her on unpaid leave, leaving the mother with income loss.

Some companies have strict maternity leave policies, and if a mother asks for additional time off, she could get fired. Instead of using the first few weeks of bonding time to enjoy a beautiful transition into motherhood, many women make the snap decision to jump back into work because losing their job is not an option.

Household chores are time-consuming endeavors that never seem to get balanced between women and men. In the U.S., where women represent the majority of the workforce, it's surprising to see that they still carry the more significant portion of household chores. In previous decades women were expected to stay home to take care of the kids and maintain the home while men worked, but times have changed, and many households haven't caught up. Women often carry the stress of trying to get laundry done, dinner cooked, and the house cleaned after a long day at work, not even including the time spent with the kids. In the American Family Survey, women and men were more likely to say that being a working parent was a challenge in good parenting and career advancements. Still, women were more likely to say that being a working parent made things harder, likely due to the household responsibilities.

Men often believe they take on the priority of paying bills and share household duties equally interestingly. The survey found that mothers felt they do two-thirds of the housework and shared paying bills equally.

A study from the U.S. Bureau of Labor found that women spend up to two hours more per day doing unpaid labor than men. We should be asking how mothers bear the brunt of the chore load where the same study found women spend almost six hours daily doing housework in addition to their jobs. If you are struggling with the daily responsibilities of running a household, discuss them with your partner. Create a plan that allows you to contribute equally to the home because less stress means a happier environment.

The progressive push from Gen Z and millennials should drastically start to change these statistics to give women better opportunities in the future and equality both in the home and in the workforce. 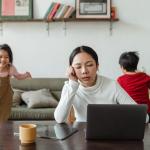 The Hidden Load: How Women Are Bearing the…