If He Does These Things, You're a Lucky Woman.

It's easy to forget how good you've got it, so here's a little reminder for ya.

1. He puts you first (even before himself)

Even though he's crazy about his kids, even though his mom is important to him and even though he takes his work responsibilities seriously, you are always at the top of his priority list.

I love knowing that because of Him we will be together forever? can't wait to marry you! #48days

You can't quite put your finger on it, but there's something special about the way he looks at you. You also know he'll be loyal, no matter what.

4. He keeps you on your toes

He's not in the business of changing you because he's crazy about your positive qualities and accepts your weaknesses (because you're worth it).

6. He's in love with your kids

Being a dad is the joy of his life. He'll get up at four in the morning to cheer in the rain at a cross-country meet or just to change a diaper because he loves his kids.

7. You miss him when he's gone

Sure, you can be apart and not fall apart, but you like being with him the best.

Even if you're just filling the tires with air, you're having a grand ol' time because you're together.

9. He makes you feel loved

Even without grand gestures, he makes you feel like an important person.

You're married, but that doesn't mean he's stopped trying to win your heart. You're lucky to be married to a man who recognizes the effort marriage takes and continues to work at your relationship.

11. He believes in your dreams

He doesn't keep you guessing. He wants to make sure you know.

13. He makes you want to be the very best

You are always trying to be better, not because he's pressuring you, but because his example makes you want to be the very best.

Whether it's with chores around the house or at the office, he gives 100 percent.

Just having him in your life makes it that much better. 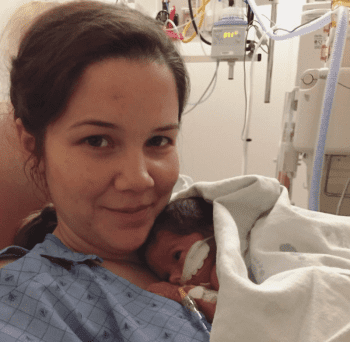 Woman Who 'lost Her Identity' From Postpartum Depression…