Stop yourself from participating before you start.

The majority of us are guilty of listening to gossip, spreading it, or being a victim of it. There’s nothing sharper than wounding another person with hurtful words. Perhaps you’ve heard, “sticks and stones may break my bones, but words will never hurt me.” Sadly, this phrase couldn’t be farther from the truth. Words do hurt, and some people may prefer to have sticks thrown at them than have gossip spread about them.

Words hurt us when someone talks about us, and the words we say about others through gossip can harm what others think about them. You may know this firsthand as some of us have had words spoken about us through the years, and we’ve taken those words as truth, ultimately affecting the way we’ve lived. On the other hand, every word we say about other people could hurt the way they live and how other people see them. Words can harm, but many of us don’t think before we speak.

We’ve all participated in gossiping and have seen the damage and pain it causes. While there are numerous reasons why people gossip, here are some reasons why women participate in it. If you relate to any of these reasons, look into why you act that way and choose to be better.

Women may participate in gossip because they’re jealous of what others have, from the seemingly perfect marriage to their physical appearance. There’s something in another woman or person that a woman could be jealous of, causing her to speak poorly about that person while being envious of them.

To stop this behavior, you have to be happy with your life and be grateful for things and the people in your life. The more gratitude you show, the more peaceful your life will be, and you won’t feel jealousy. This lifestyle of appreciation will slowly knock down gossip and jealousy from rotting your bones.

If you want to stop yourself in your tracks, take some time to reflect on things that you like about yourself. You could start by reciting affirmations or writing them down and posting them where you can see them. Once you start focusing on the positive, you won’t feel the need to gossip about others or focus on the negative things. This practice could also help you see the positive things about the people you’re talking about.

It takes attention off their situation.

If you’re speaking negatively about someone else, people won’t have time to find the flaws in your situation. Women might participate in gossip to take their attention off their lives and distract themselves by talking about others instead. Maybe you’re going through a rough patch in your marriage, or your children have been misbehaving. It’s easier to worry about other people’s situations to ignore your drama as it takes the attention off what’s happening.

If you stay out of everyone else’s business and focusing on your situation and how to fix it, you’re less likely to talk about other people’s lives. This lifestyle will allow you to be a woman with a testimony to other women instead of being known as the gossiper.

Boredom is one of the top reasons why some women participate in gossip. Some women simply don’t have anything better to do. For example, some women go through the same tedious routine every day. They wake up and have trouble differentiating one day from the next. By participating in gossip, they’re adding some spice and excitement to their lives. Gossiping and speaking poorly of others could be their only source of entertainment.

When you’re bored with your life, you tend to stop focusing on what you have going on and put your attention on others and their lives. However, by focusing on other people’s lives, you cannot see the positive things coming to your life.

To stop boredom from forcing you into gossip, you have to focus your time and efforts on your life instead of others, even if your life lacks excitement and entertainment. Who knows? This dull season could prepare you for an exciting season around the corner. It’ll be easier to focus on what you have going on with that mindset.

The final reason women may gossip is that it’s the thread that connects some friendships. For example, if you and someone else share a dislike toward the same person, you click because you have something to talk about. It’s similar to making friends with someone because you both like Pilates or yoga classes. Gossip can be an activity that links you and a friend together.

Is there a friend in your life where all you two do is gossip about others? If you take away the person or people you talk about, would you have anything else to discuss? If the answer is no, then your friendship is based on gossiping. Instead of focusing on speaking about others, try to find another activity that the two of you enjoy. Doing so will connect you on another level while stopping you from gossiping.

Whatever the reason you have for gossiping, it’s important to remember to bring the attention back to you and your life. Participating in gossip comes from focusing on the outward instead of the inward. When we concentrate on what people around us are doing, we get caught up in gossip, which can hurt people. You’ll get so much more out of life if you focus on yourself and what you have. Choosing not to participate in gossip can also stop you from hurting someone else and causing damage to their life. 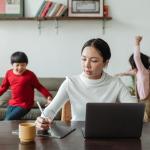